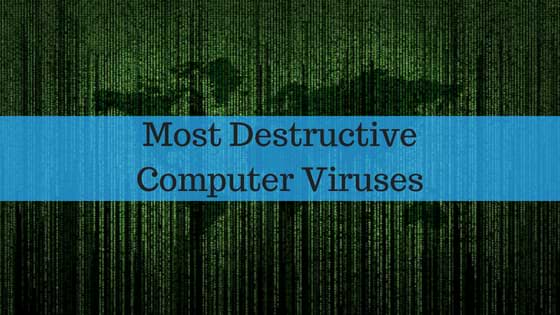 The mere mention of the term computer viruses sounds alarming. These viruses have caused global damage where they have been able to wipe out the entire information on a hard drive, blocked the web traffic on a computer network for hours, converted an innocent machine into a zombie who could replicate and send themselves to other computers for the infection to spread rapidly.

Computer Virus can enter your system through any of the following methods:

This computer virus acts like a worm that attacked more than ten millions of Windows personal computers. The way this virus works is to send us an email message which includes a subject line “ILOVEYOU” and has the attachment of “LOVE-LETTER-FOR-YOU.txt.vbs.”

Once clicked, this virus gets has the abilities to duplicate and forwarding itself to everybody on the victim’s address book and proceed to overwrite files with itself which makes the computer unbootable.

This virus is named after its creator Robert Tappan Morris who came up with this is 1988, a graduate student of Cornell University released the virus which affected approximately 10% of all the computers that were being connected to the internet.

At that time 60,000 computers were attached to the internet, and the worm infected 10% of them.

The unique feature of this virus to hit on the speed of the computer as it slows down the computer speed to the point at which it becomes unworkable.

Another example of a nasty computer virus is Conficker which was created to majorly targets Microsoft Windows Operating system. This virus was first identified in November 2008.

The tactic of this virus is to attack and gain on the flaws of the Windows operating system to fetch the administrator password via dictionary attacks while forming a botnet.

This virus had a broader reach in which it infected millions of computers which comprised of government, business and home computer in over 190 countries.

The word “Computer Virus” itself is a scary name for most of the computer users. Because we all know, that viruses can bring in a lot of damage to the computer.

This danger virus enters and harm the victim’s privacy, get access to personal and private files and can even corrupt the precious data which includes photos, videos, saved passwords, etc. This computer virus has caused substantial financial losses for many companies.

This virus was first discovered in 2007; this is a type of Trojan horse malware that targets mainly drive-by downloads and phishing schemes. It was majorly used to gather and steal information from the United States Department of Transportation.

Zeus virus is a dangerous computer virus because it possesses particular sly computer infecting techniques that make it challenging for any antivirus to detect it.

Due to its infectious and widespread reach technologies, this malware has become one of the most massive botnets on the Internet.

On one of the most fateful day of 1st February 2004, almost one million computers were infected with Mydoom’s denial of service attacks, and it is one of the most significant such assaults to date.

The Modus operandi of this virus is that it spreads through email which contains a text message which says “Andy; I’m just doing my job, nothing personal, sorry.”

When the victim receives and opens this email the already present malicious code starts automatically downloading and then steal the victim’s entire contacts of email, from here it spread to the victim’s friend, relatives, and colleagues.

My Doom is another virus, which came to highlight in 2004. It became another fast-spreading email virus, much like ILOVEYOU Virus.

My Doom was able to infect two million computers and created a massive denial of service attack that adversely affects the whole World Wide Web.

It replicated by sending itself via email. It fooled people into clicking on it by using the subject line “Mail Transaction Failed,” and it would send itself out using the email address book of the user.

The damages of this virus were said to be in the range of $38 billion.

As the name suggests this virus as a broader reach, SQL Slammer is a computer worm that infected 75,000 victims within ten minutes. SQL Slammer when it gets

into the infected computer showed drastic results when it slowed down the internet speed and traffic, and an excellent example of its impact was seen when it brought down South Korea’s online web traffic to a standstill for 12 hours.

SQL Slammer mainly targeted on the servers by generating random IP addresses and discharging the worm to those IP addresses.

This virus worked by affecting servers, not computers. Compared to other infections, this one was tiny, no larger than 380 bytes. The method that this virus used to spread itself was to generate random IP addresses and sending itself to these IP addresses.

If the IP address belonged to a computer system that ran Microsoft’s SQL Server Desktop Engine (unpatched version), then that computer would become infected and send itself out to more random IP addresses.

This virus was able to infect over 75,000 computers in less than 10 minutes. It created so much unwanted traffic that it overloaded thousands of network routers across the world, which eventually led to shutdowns.

This virus was named after an exotic dancer from Florida, and it was created in 1999 by David Smith; it was a Microsoft Word macro. It worked by spreading itself through email.

The virus would arrive in peoples Inbox with the subject title “here is the document you asked for, don’t show it to anybody else.”

This was, of course, designed to goad people into clicking on it, and for those who did, the virus would immediately forward itself to all the people in the user’s address book.

After some time, the virus was able to replicate itself across a significant portion of the web.

Though it didn’t adversely affect the internet, it did cause a big problem for many email services, as it increased traffic tenfold; this ultimately led to email services running considerably slower.

David Smith was eventually arrested and sent to jail for 20 months; the US government also fined him $5000. Though it didn’t cause any real damage to any systems; it was one of the first viruses to gain any recognition.

With the natural progression and advancements in our technology, new viruses have been developed and pushed out there; one of such viruses, known to quite many people is the Klez Virus.

It first arrived on the scene in 2001, and its unique characteristics lead to it floating around the internet for several months. The Klez Virus successfully replicated itself via email services.

There were numerous versions of it; all made its behavior either like a Trojan, worm or virus. Like a virus, it was capable of disabling the internet security software on an end users computer and act as a fake antivirus removal tool itself.

When the virus came out, many new versions were released shortly after; these updated versions were capable of spoofing. It was also capable of deleting email messages and rendering a computer system inoperable.