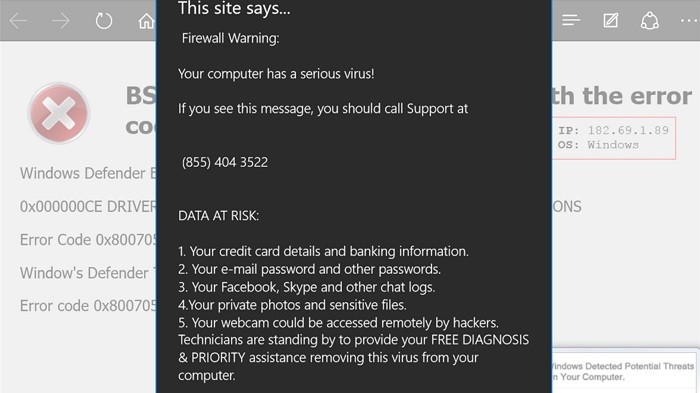 If you see pop up from Microsoft stating that “Your computer has a serious virus” then don’t panic as it’s a fake virus warning and is not officially from Microsoft.

This is commanly known as Microsoft Edge Virus nowadays.

Whenever you see the pop up displaying, you won’t be able to use Edge as the pop is continuously displayed, the only way to close edge is using task manager.

There would be a challenge in opening Microsoft Edge settings or any other tab as the pop up is again showed almost immediately after reopening edge.

The main concern with this warning message is that it gives a toll-free number for the user to call to get support.

Be alert and don’t fall for this trap, as it’s not officially from Microsoft and it’s possibly a scam to gain access to your credit card details or maybe charge you for fixing the issues.

In the past, it has been obverse that the users who have fallen for this scam have reported they have been scammed for thousands of dollars, so beware of such scams.

Alert- Not to call any number which is generated by Applications.

Post this virus or malware sneaks into your computer, it seems to altered Microsoft Edge settings to display this pop-up which is a strange thing, as Microsoft Edge is inbuilt in Windows 10, this proves that there is a close loophole which Microsoft should fix as soon as possible.

Technically, this adware uses complicated coding to bypass the usual firewall of the computer they are designed to insert such fake pop-ups on the victim’s computer which enables the malware creators to generate money by scaring and fooling people. This is a part of an adware virus operation to infect the computer.

Most of the adware’s are mainly designed to make money.

Once any adware program has sneaked into your computer, it would inject small codes into the pages which you visit very often like your banking account or any social media.

This malicious code will create numerous advertisement banners some may include fake security warnings like “Microsoft Edge Virus” or insert a sponsored ad on the pages you are viewing. Web browsers are always under the radar

Once your computer is infected with adware, most of your web browsers like Google Chrome, Mozilla Firefox, Internet Explorer, and MS Edge will get redirected to fake security warnings or sponsored advertisement banners.

How does an Adware spread?

Once a browser hijacker infects the computers, it would make way for other malware and one of the widespread malware these days is Adware.

Also See: MpCmdRun.exe – What is it and How to Remove It

Common symptoms of adware include:

How to get rid of Microsoft Edge virus?

We want to suggest that you get rid with Microsoft Edge virus ASAP, as a prompt action will help to secure the computer at its earliest.

The longer this virus remains on the computer that required it will make the machine more vulnerable with other malicious programs.

To gain success in removing this Microsoft Edge virus, we recommend you to download and install the best antivirus called Malware Crusher.

This is a great app has the ability to lay down the course of action of this virus and its code, it can analyze and diagnose, and they foretell the danger involved and therein normalized by creating anti-virus code.

For the optimum success of this program, put the system on real-time tracking with this antivirus tool which will crate most of these issues like malware or threats.

Another great feature of Malware Crusher is that it can scan, detects and remove most common threats from your machine and makes the infected windows resources secure and safer variable.

After the installation of this application on your computer, be assured no additional step is needed for antivirus and antimalware application.

Installing Malware Crusher on your PC is the most secure and best solution for the overall betterment of the computer’s health.

Malware Crusher ensures that your computer has the most updated and advanced versions of the software with critical and emergency updates.