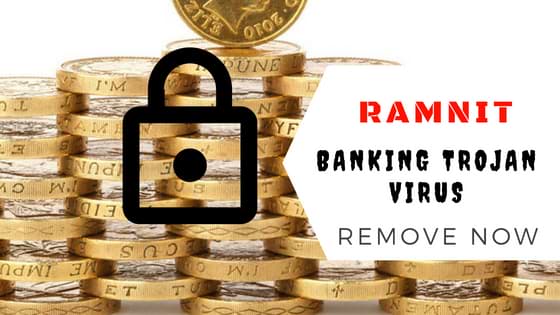 Ramnit is a Trojan that secretly gets inside your PC and leads to plenty of annoying troubles on your system. This Trojan has been developed by a group of cybercriminals having wrong intentions and evil motives.

The original RAMNIT variant was a worm which was first encountered in 2010. It propagated through several removable drives and FTP servers. In 2011, it was discovered that Ramnit copied some parts of the Zeus source code to transform itself into a banking Trojan. Being a banking Trojan, it stole user credentials and other personal information.

Ramnit has the ability to evolve and spread itself. Its developers have expanded its capabilities over the years by adding features such as web injection mechanisms that allow it to compromise the websites of financial organizations.

Related: What is Nanocore? and How to remove nanocore virus?

If by any means, you got Ramnit Trojan, the only solution is to remove it immediately for the proper functioning of your system. This will also ensure that your system is free from Trojans and other malware.

How Ramnit Enters your System?

Ramnit can enter your system through a wide variety of distribution channels:

Also See: What Is Mebroot? How To Remove Mebroot Trojan Virus

What are the Harmful Effects of Ramnit?

Ramnit can lead to the following malicious effects on your system:

How To Remove Ramnit?

Follow the given Ramnit Removal Process to get rid of the malicious malware.

You can easily remove Ramnit with free malware removal tool. Use a reputed and automated free malware removal tool to delete Ramnit permanently from your system.   After successfully eliminating the malicious Trojan, make sure to create a robust firewall to avoid any such issues that makes your system and privacy vulnerable to various online threats.

How to Prevent Installation of Trojans and other Malware?

Tips to prevent Trojans and other malware from Infecting your system: